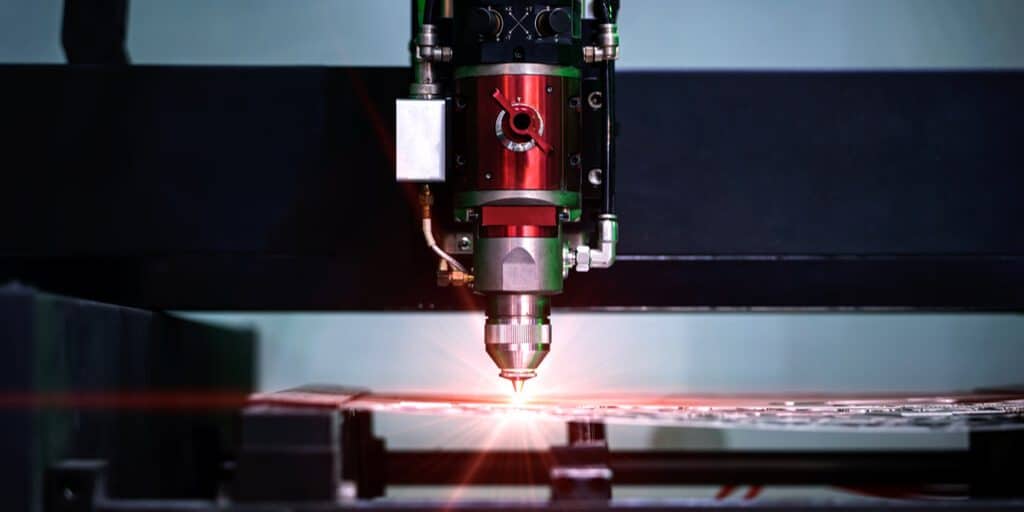 Plasma cutting is a process used to cut metals of different types, including steel, using a tool called a plasma torch. But let’s see in more detail how this process works and in which areas it is used.

What exactly is plasma cutting?

The plasma cutting process allows many types of metals to be cut using a plasma torch. During the process, a gas is ejected at high speed through a nozzle, establishing an electric arc between the electrode and the element to be treated, thus transforming the gas into plasma. The latter is capable of bringing the metal to the melting temperature. Then, the kinetic energy created by the gas expels the molten metal from the area to be treated, which allows the cutting operation to continue.

The plasma cutting process is basically divided into two phases. In the first, called the “ignition phase”, the high voltage current causes a high intensity spark between the electrode and the nozzle, creating the plasma, called the “pilot arc”. This process can also be carried out with a “contact” system, in which the nozzle is placed in direct contact with the electrode, causing the current to flow between the two elements in a short circuit and the gas causing the detachment of the two elements. Finally, the ignition spark is created.

The second phase is called the “transfer phase”. During this process, the plasma comes into contact with the anode, made up of the element to be treated, conducting a low voltage electric current.

Plasma cutting: how to use

The plasma cutting technique lends itself easily to all requirements, as it allows sheet metal of all thicknesses to be processed. Hand-operated plasma torches can cut sheet metal up to 50mm thick, while more powerful automatic torches can process items up to 130mm thick. Thanks to the possibility of directing the plasma cutting machines, this technique is particularly versatile and precise, allowing different types of cuts to be made, even on curved or angular elements.

The prices of these machines are quite high and for this reason plasma torches are reserved for a purely professional usealthough with the advance of technology that has allowed the creation of less and less cumbersome machines, it is now possible to find plasma torches with prices within the reach of many DIYers.

However, the plasma cutting technique can also cause certain metals to boil, resulting in the production of toxic fumes dangerous to health. This is why these machines must be used in special premises, well ventilated and equipped with a smoke evacuation system.

In addition, it is useful to know that plasma generates ultraviolet radiation, which must be protected by using appropriate masks, glasses and work clothes. Given the risks to which the user could be exposed (particularly if he does not have sufficient knowledge of these machines and the appropriate environment for working), it is advisable to use this technique only in a context professional.

Other tests/comparisons and buying guides that might interest you